This Girl caught glimpse of their sign as I was driving down Fleet Street in Moonah recently.
I had previously noticed their window with its beautiful Taste of Paradise logo and had wondered what lay behind the door.
Wonder no more, Taste of Paradise have been importing coffee for 20 years as coffee wholesalers and for the past 7 have been roasting their own under the Café de Lacey brand in little old Moonah, selling to the café industry. 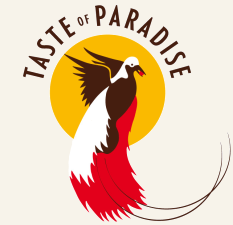 Owner Darren De Lacey’s story is on the back of their beans and tells of his early love of coffee cake, the start of his passion for coffee. Coffee is a passion also shared by his wife Sonya, who was born in the Eastern Highlands of Papua New Guinea, an area renowned for growing some of the world’s finest coffee. Sonya’s great-grandfather was a tea and coffee merchant in the 19th century – it is no wonder that coffee became their life!

They opened their doors to the public as TOP Cafe Bar in December 2013.  TOP Café Bar is not your traditional café, while they do have some casual seating in the front window they are
mostly for grab and go.

In addition to their take-away coffee, they offer freshly baked muffins and some of the specialties they wholesale such as almond crescents and Australian and imported confectionery. Of course if you want to have their coffee at home you can purchase their Café De Lacey beans directly from them at the café too.
I chose their Premium Estate beans to take home, which they happily grind for free. These beans have won five awards including; Silver Medal Winner 2013 Golden Bean – Single Origin and Bronze Medal Winner – 2013 Sydney Royal.  Also Bronze and Silver in Tasmania’s own Fine Food Awards for 2011 and 2012.

They’ve just won Gold, Silver and Bronze Champion Coffee at the Royal Hobart Fine Food Awards 2014.
This Girl has been back a few times now, most recently purchasing their Café Quattro blend and a dreamy box of European Thick Chilli Chocolate powder.
We try to buy coffee from Tasmanian roasters where we can and Café de Lacey beans are a winner in our house with Devote ranking it high on his list of favourite Tassie roasters.

Taste of Paradise, incorporating TOP Café Bar is at 6 Fleet Street, Moonah and are open Monday to Friday 9am to 5pm.
Around Hobart you can enjoy their coffee at Boutique Espresso at 162 Macquarie Street, Kornet Salt, Sugar, Coffee in Centrepoint, Realm Café in Mather’s Lane and Elizabeth Street Food + Wine in North Hobart. You can also buy their beans from Hill Street Grocer South Hobart.
Find Taste ofParadise and TOP Café Bar on Facebook here.
You can order coffee and other products on line here. Note as wholesalers, they do supply a lot in bulk, but then again, a 42 pack of Biggles the Bear in milk chocolate doesn’t seem unreasonable.
If you like coffee you might also like our other posts on coffee:
5 Must-have coffees in Hobart’s CBD
Gioconda
Hobart hole-in-the-wall cafes

This site uses Akismet to reduce spam. Learn how your comment data is processed.